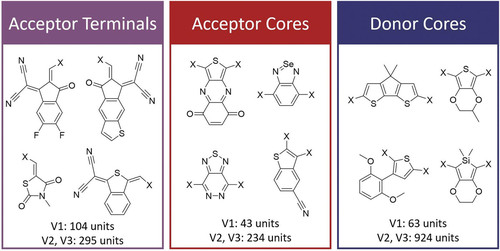 Materials optimization for organic solar cells (OSCs) is a highly active field, with many approaches using empirical experimental synthesis, computational brute force to screen a subset of chemical space, or generative machine learning methods that often require significant training sets. While these methods may find high-performing materials, they can be inefficient and time-consuming. Genetic algorithms (GAs) are an alternative approach, allowing for the “virtual synthesis” of molecules and a prediction of their “fitness” for some property, with new candidates suggested based on good characteristics of previously generated molecules. In this work, a GA is used to discover high-performing unfused non-fullerene acceptors (NFAs) based on an empirical prediction of power conversion efficiency (PCE) and provides design rules for future work. The electron-withdrawing/donating strength, as well as the sequence and symmetry, of those units are examined. The utilization of a GA over a brute-force approach resulted in speedups up to 1.8 × 1012. New types of units, not frequently seen in OSCs, are suggested, and in total 5426 NFAs are discovered with the GA. Of these, 1087 NFAs are predicted to have a PCE greater than 18%, which is roughly the current record efficiency. While the symmetry of the sequence showed no correlation with PCE, analysis of the sequence arrangement revealed that higher performance can be achieved with a donor core and acceptor end groups. Future NFA designs should consider this strategy as an alternative to the current A-D-A′-D-A architecture.