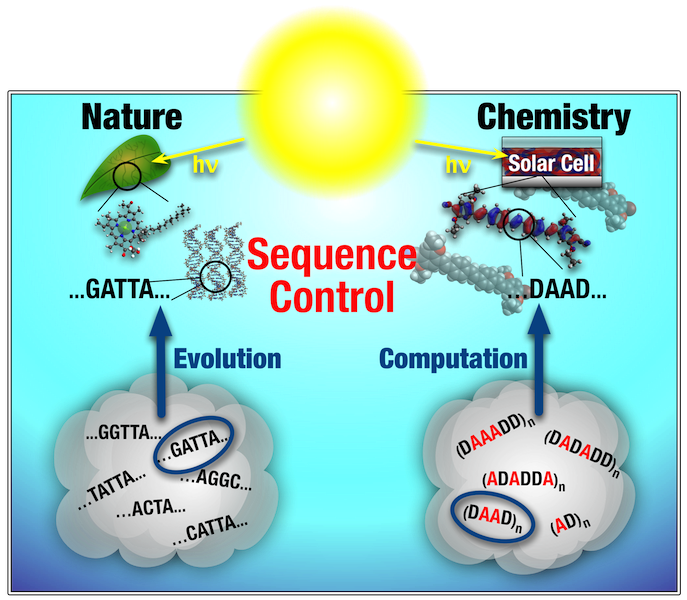 Although sequence must necessarily affect the photophysical properties of oligomers and copolymers prepared from donor and acceptor monomers, little is known about this effect, as nearly all the donor/acceptor materials have an alternating structure. A series of sequenced para-phenylene- vinylene (PV) oligomers was synthesized and investigated both experimentally and computationally. Using Horner-Wadsworth-Emmons (HWE) chemistry, a series of dimers, trimers, tetramers, pentamers, and hexamers were prepared from two building block monomers, a relatively electron-poor unsubstituted p-phenylene-vinylene (A) and an electron-rich dialkoxy-substituted p-phenylene-vinylene (B). UV-Vis absorption/emission spectra and cyclic voltammetry demonstrated that the optoelectronic properties of these oligomers depended significantly on sequence. Calculations predicting the HOMO-LUMO gap of the sequenced oligomers correlated well with the experimental properties for the 2- to 4-mers, and the consensus model developed was used to design hexameric sequences with targeted characteristics. Despite the weak acceptor qualities of the “A” monomer employed in the study, HOMO-LUMO gap differences of ~0.25 eV were found for isomeric, sequenced oligomers. In no case did the alternating structure give the largest or smallest gap. The use of sequence as a strategy represents a new dimension in tailoring properties of π-conjugated polymers.